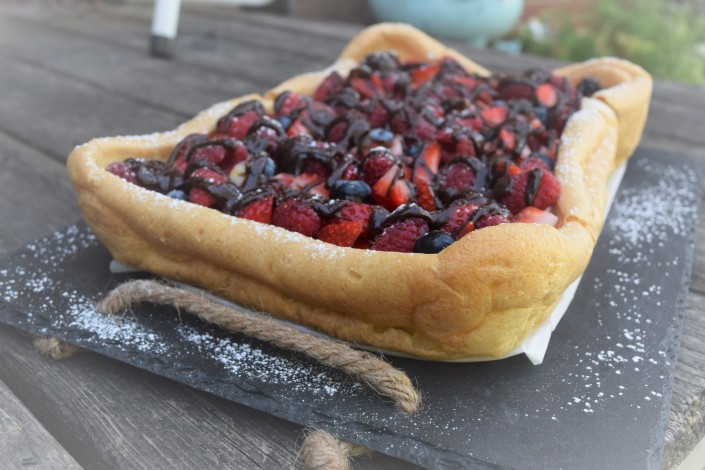 You know how some recipes are born out of desperation and necessity? I’m talking about those times when you need a dish and start browsing your cupboard and fridge to see if inspiration will strike. Today’s recipe is one of those deals.

Coming home from market one hot Saturday afternoon in July many moons ago, I was trying to decide what dessert to make for a potluck dinner at our church the next day. I knew it would contain strawberries because they were in full swing at that time. I looked through my pantry to gain inspiration and found a cooked vanilla pudding mix. I knew I had eggs in the fridge. At that time a chocolate eclair was making the rounds big time. It had a cream puff base with pudding, whipped cream, and chocolate glaze layered on top. As a family we love fruit, so I thought, “Why not make a fruit-topped eclair?” So I started boiling, mixing, baking, and refrigerating; improvising as I went along. It’s what I do.

To make a long story short, the result was a success, I entered it in our church cookbook a year later, and have had several people tell me they make it every year in berry season. It’s light, fluffy, and the critical criteria of good looks has been met. I learned to make food look good from my dad; he always said, “Food has to pass by my eyes before it reaches my stomach.”

For this one, I added blueberries and raspberries with the strawberries because it’s the time for those big sweet thimble-sized berries that we look forward to every year, and my philosophy is that raspberries make everything better. It would be a great Fourth of July dish for you Americans with its pops of red, white and blue. Also, this time I changed the chocolate drizzle to a ganache drizzle. Uh huh. Chocolate ganache with fruit? Bring it on! I’m toying with the idea of substituting Greek yogurt for the whipped cream layer sometime. I bet that would be good.

Boil water and butter together.

Stir in flour and salt until it gathers into a ball. 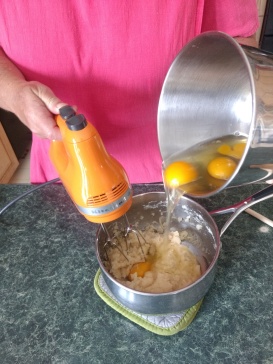 Remove from heat and beat in eggs one at a time.

Hover or click on the pictures for step by step instructions. The cream puff base is easy to make and you can cook the pudding while it’s baking. The puff can also be frozen for a future time. The  dough will look flat in the pan, but will rise while baking, especially the sides.

This post is sponsored by Martin’s Family Fruit Farm and my blog is featured on their new website. The views and stories presented here are my own.

Ontario grows many raspberries, strawberries, and blueberries. Strawberries begin to ripen by the middle of June, with raspberries and blueberries joining them about a month later. It goes without saying that this time frame is affected by the weather in any given year. Berries are loaded with antioxidants, fiber, potassium, and vitamin C. So berry up!

or  2 cups of your preferred custard recipe

CREAM PUFF BASE: Grease a 9″ by 13″ pan. Bring water and butter to a boil in a medium saucepan. Turn off heat and add flour and salt all at once, mixing it in quickly with a wooden spoon until the dough gathers into a ball. Remove pot from heat and let it stand 5 minutes before adding eggs one at a time, beating or whisking vigorously after each egg. Beat until smooth. Spread into the bottom of the prepared pan. Bake at 375° F or 191° C for 40 to 45 minutes or until golden. Cool on rack, cutting 5 or 6 small, shallow slits in the puff for steam to escape. Puff will have high sides and a sunken centre. Remove puff to serving tray when cool.

FILLING: Meanwhile, cook your pudding or custard mix using 2 cups of milk according to directions until it’s thick. Add flavouring and allow to cool. Press plastic wrap directly on the surface of pudding after about 5 minutes to keep skin from forming. Chill until ready to assemble. To assemble, spread pudding or custard on the puff base. Whip cream, flavourings, and confectioner’s sugar until stiff; spread on top of pudding.

TOPPING: Top with your choice of whole and sliced berries. Heat cream in a small saucepan just until it begins to boil. Pour over the chocolate chips in a small bowl and allow to sit undisturbed for about 7 minutes. Stir the chips into the cream until it thickens and gets shiny and is fully incorporated. This is your ganache. Allow to sit until it is easy to drizzle (not long), then drizzle from a large spoon over the surface of the berries in a pretty pattern. Chill. This can be done several hours in advance. Shake additional confectioner’s sugar over top before serving, just for purtiness’ sake.

This entry was posted in Desserts.

Wow. This looks absolutely amazing!! I can’t wait to try it like soon. 🙂 Thanks for sharing.

You are very welcome. Let me know how it turns out for you!

Yes, it turned out a.m.a.z.i.n.g. My brothers, before their first bite was down, told me to make more. umm there was still the whole pan to eat, but I guess they liked it so much that they thought they could eat it all in one day! 🙂 I did end up making another one- this time tweaking the recipe and doing it in a pie pan instead of 9×13 since it took us a little bit to get the other down, even though it was good! Thanks again for sharing it!

Oh, I like the idea of the pie plate for a smaller quantity. And it would present a pretty visual as well! So glad your family liked it!