With Family Day upon us, I asked Steve’s oldest sister Laurel what she remembers doing together as a family in those very early days when Martin’s Apples was just a fledgling business. This is what she remembers, “I have memories of picking apples every day in the fall, after school (it seemed like every day, at least!). I remember it was quite amazing when we made that old shed into a cooler and we had a cold place to store our apples. Before that, I remember storing apples (russet; Dad’s favourite back then) in our basement under the old kitchen/study, because it was cooler there. I also have memories of polishing apples in the driving shed before we went to market the next day. One Friday evening in particular stands out in my memory. It was a cozy fall evening and we were all out there together sorting and individually shining each apple for a very large order* that was being picked up. Janet (another sister) and I ate an incredible amount of apples that night.” *This order was for about 20 bushels of apples, which would be the equivalent of around 2200 apples!

It’s hard to imagine polishing each apple by hand, but there you have it! The Martin’s took pleasure in having an attractive product from the very beginning. I have a personal attachment to that cement pad that housed that first apple cooler, because some years later it became the foundation for our mobile home; our first abode when we married. It was tucked in the orchard, partway down the “bush lane”. It was a very romantic location for a young couple’s first home, I thought. I have many good memories of living in our orchard bower.

The Martin family has also reminisced about picking up the Melba apples that had fallen from the tree in the back yard before they could mow the lawn. These apples were then turned into applesauce for their large family. Incidentally, that old Melba tree is still standing and is the only apple tree left from those days. It was in the back yard before the orchard was planted. In an earlier post, I mentioned that creamed potatoes and sausage were two of the quintessential foods of our Mennonite culture. There is another one that should be added to that list, and that is applesauce. There are many families that eat it two, or even three times a day. It is on their table morning, noon, and night, usually as dessert.

Traditionally, applesauce is made by washing (don’t peel) apples, cutting them in quarters, and cooking them in a bit of water. Then the hot apples are put through a strainer, and sugar or honey is added. The sauce is funneled into jars, covered and steamed for 20 minutes. Sometimes I like to make a chunky sauce that I don’t preserve, in which I peel the apples, core and cut them, and cook them in about an inch or so of water until soft. I mash them with a potato “stomper” as we used to call it, add desired amount of sugar (or not), and let it cool. You could also use an immersion blender, or a pastry cutter. Be aware that if you choose not to add sugar to your canned sauce, your applesauce will turn brown in the jars after it’s been sitting for awhile, since sugar is a preservative. 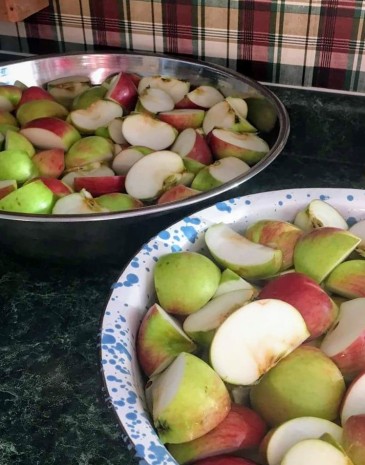 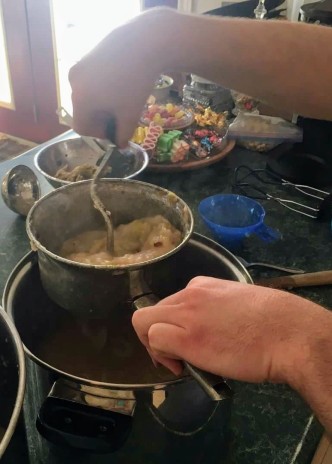 Grinding the sauce through the strainer 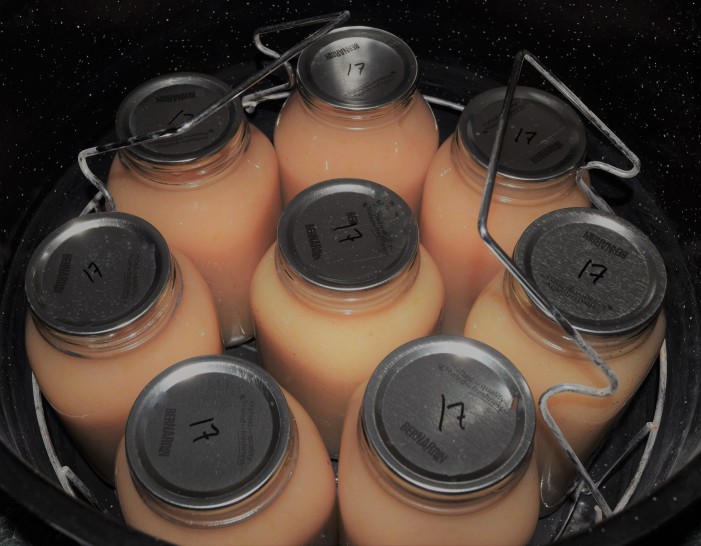 A lot of people use the first apples to make applesauce. You can do that if you wish, but if you wait until the apples are riper, the sauce will be much sweeter and full of flavour naturally. Most apples can be turned into sauce. I think a blend of apples makes the best sauce, just as it does in fresh cider.

There are several types of strainers; the old-fashioned cone ricer that my mom used, the basket-style that is pictured here, and a high-falutin’ Victorio strainer. Take your pick!

This post is sponsored by Martin’s Family Fruit Farm. The recipes, views, and stories are my own.

Put about two inches of water into a very large kettle. Wash and quarter the apples, placing them in the kettle until the kettle is about 2/3 full. Cover  the remaining apple quarters with water in a large bowl until kettle is free again. Cook the apples until soft and puffy, starting them at a boil, then turning them down to a low boil. Stir to keep from scorching on the bottom of the kettle, especially at the beginning. Meanwhile heat empty clean quart jars in the oven on 250° for at least 10 minutes to sterilize. Put snaplids into a little pot, cover with water, and boil for 5 minutes to soften the rubber. Turn down to simmer. Prepare another kettle or crock with the strainer over it, and ladle the hot apples into the strainer in batches. Rotate through strainer until the pulp is dry. Scrape out the junk and repeat process until all the apples are used. Add desired amount of sweetener to the sauce (I usually add 1 – 2 cups per kettle); stir and taste. Funnel the sauce into the sterilized jars, filling to middle of the neck (about 1/2″ from the top), then wipe the rim of the jar, carefully fit the snaplid on the top, and screw on the ring just until tight. Fill a canner half full of warm water, set jars in the water, and top up the water if needed. It should come to the base of  the jars’ necks. Cover the canner and turn the burner to high. Once the water is boiling, turn heat to medium-low, and continue steaming for 20 minutes. When timer goes off, turn off burner, set lid ajar, and let the jars sit in the water for about 10 minutes to settle. This keeps them from spitting juice after they are removed. Remove carefully and set on a towel to cool. Listen for the pings and pops as the lids seal; such a sweet sound of success! Let sit undisturbed for 24 hours. Remove rings, being careful not to disturb the seals, wash up and store in a cool place until ready to eat. Enjoy plain with pork chops or with a sprinkle of cinnamon, a slice of cheese or chocolate cake!

*Most hardware stores have canning supplies. The basics are a canning kettle with a rack, jar lifters, jars, snaplids, rings, and a funnel. There are kits that include a magnetized lid lifter that I have found useful.

This entry was posted in Gluten Free, Heritage Recipes, Preserves. 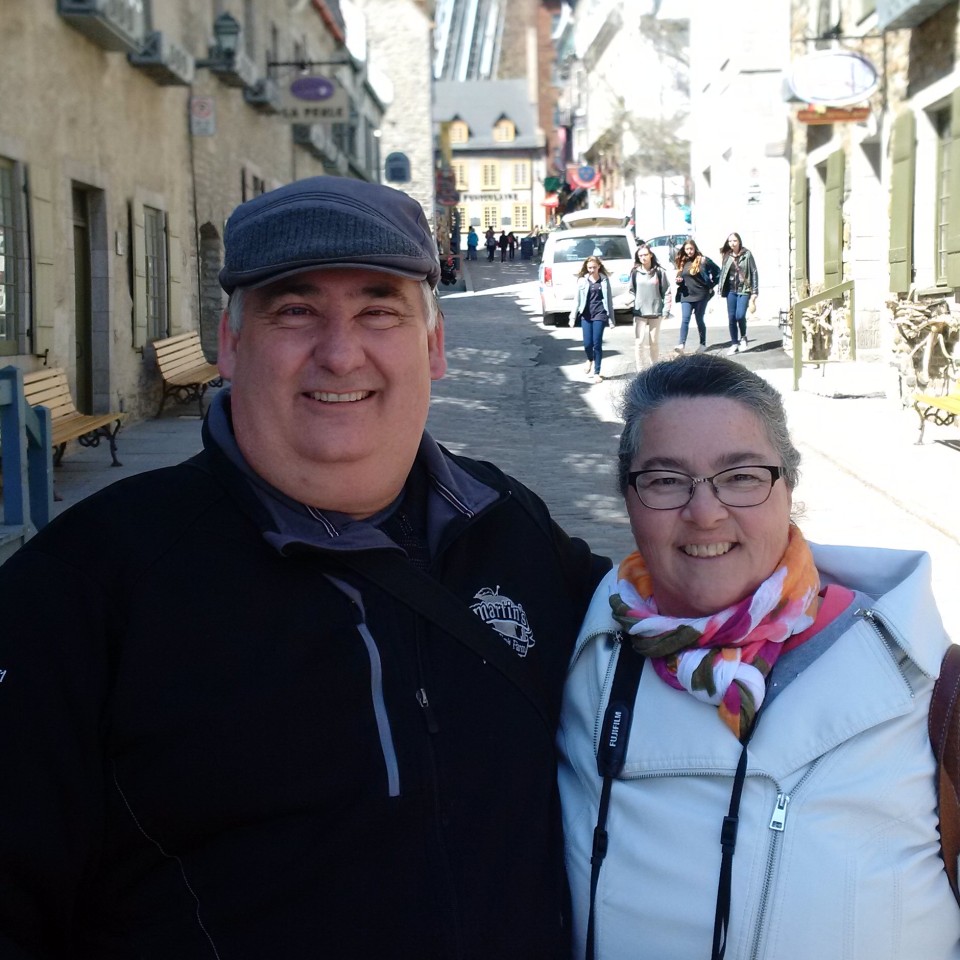