I grew up fishing. I fished with my dad, my grandma, my grandpa, and my siblings. I recall getting up as the sun was just beginning to peep over the horizon and going with Dad down the long hill in the woods behind us to the river. Back then it was probably the only thing in the world that could get me out of bed early voluntarily! Then we would wade through the long, dewy grass in the flats beside the river; the long fronds as high as my waist. Often we caught only shiners, small perch or rock bass or sometimes, ugh, a sucker. But every now and then, oh joy of joys!, we would catch a nice black bass. Then we would trek back up the hill with our catch (or not!). Dad would expertly filet them and Mom would dust them simply in flour, salt and pepper to pan-fry them. Boy, oh, boy that was tasty. Even though we were a large family, Mom and Dad made sure we got away on a vacation most summers. Usually it was to a cottage area, and Dad always made sure it included good fishing. As a result of these childhood experiences, nearly all of our Kraemer tribe loves fish to this day.

Most of my kids also love to eat fish, so when my daughter asked what we’re having for Sunday lunch on a rare weekend when she was home from college, I immediately thought of the salmon fillets I had tucked in my freezer for such a time as this. I had also promised to include apples in my next blog, sweet potatoes team superbly well with apples, and the rest, as Dad used to say, is history.

I found a recipe for baked salmon that I tweaked to adapt to the addition of sweet potatoes and apples. And I call it a “roast” because that word rings more sweetly in my ears than “bake” does. It sounds a lot more sophisticated, I think. And salmon is the epitome of fish sophistication, no? 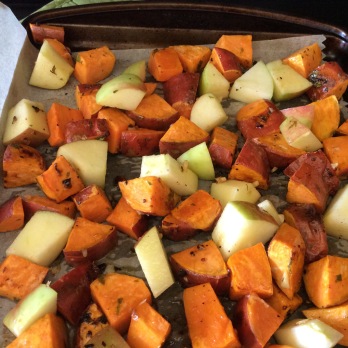 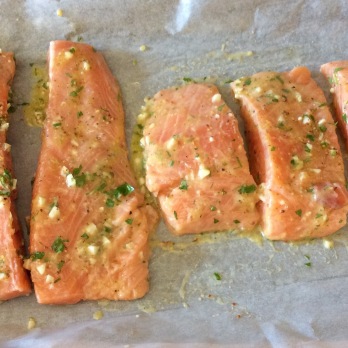 It was simple; once again I made one sauce mixture that I divided between the meat and the vegetables, like I did in my last post. It worked out great; the salmon and the sweet potato/apple mixture roasted in about the same amount of time, and while they were roasting, we “spinached” the plates and set the table. Best of all, it tasted wonderful! Even Steve liked it. He did not grow up fishing. He grew up feeding hogs and picking apples, so guess what he likes to eat? Yup; you guessed it; pork. And apples. In fact, you could substitute pork loin or chops for the salmon in this recipe and it would be equally as good, I’m sure.

Sweet potatoes grow underground as tubers. I found it fascinating that Steve’s mom grew them in her garden, because I had understood that they are hard to grow. They are high in beta carotene, fibre, and rapidly digestible starch. In other words, they’re good for you, unless you’re highly diabetic. We also love them roasted whole in the oven or microwave and eaten with butter, salt and pepper. Are sweet potatoes and yams the same thing? As a a matter of fact, all yams are sweet potatoes, but not all sweet potatoes are yams. For an explanation of that cryptic statement, click here.

I used a Honeycrisp apple in this dish because you want to use a firm apple that will not turn mushy when roasted. Honeycrisp is an amazing apple that works well for just about everything you want it to do. It has taken the apple world by storm and turned it right side up again. We hear over and over from our customers, “I thought I didn’t like apples, then I had a Honeycrisp”. It is always crisp, very juicy, has a thin skin, and the texture of the flesh is almost like that of a Japanese or Bosc pear. It is also our most expensive apple by far, for several reasons. We call it the Cadillac of apples. Empire, Spy, Gala, Ambrosia, Russet or Crispin (also called Mutsu) all work well for a smaller pricetag.

Preheat oven to 450° F. Whisk or shake together all the sauce ingredients. Line two separate baking sheets with parchment or foil. Lay the salmon on one pan, skin side down. I cut my skin off; not half as expertly as Dad would have, I might add. Cut sweet potatoes and onions in 1″ chunks. Lay them in a single layer in the other pan. Cut the apple into 1″ chunks as well, but don’t add them yet.

Spread half of the sauce over the salmon fillets. Pour the remaining sauce over the sweet potatoes and onions and toss them lightly until coated. Put both pans in the oven and bake them for 15 – 20 minutes, based on the thickness of your salmon. While the meal is roasting, set the table and spread 1 cup of spinach on each plate. Test your salmon after 15 minutes by sticking a fork in the thickest part of the fish and twisting lightly. If it flakes and doesn’t look raw, it’s done. If not, give it another 5 minutes. At this point, add the apple chunks to the other pan and roast them for 5 minutes as the sweet potatoes finish. Remove both pans from the oven.

To serve, divide the sweet potato/apple mixture on top of the spinach, then top with the salmon. Pour any pan juices over the fish. We found there wasn’t a lot of juice left over so we drizzled a bit of poppyseed dressing over the spinach. Because we like heat, I also snipped a bit of dried red chili pepper over the fish. Laying a slice of lemon on top would also be gorgeous. Happy fishing!

This entry was posted in Gluten Free, Seafood.