Popcorn, you say? She’s going to write a post on popcorn? She is indeed.

You see, popcorn has been an integral part of my life as long as I can remember. We fed lunch to a crowd of visitors after church every other Sunday. There could be anywhere from twenty to thirty people seated around the table on those days. Yup. You can read more about those early Sundays here. Then, around 3:30 or 4:00 pm, we would bring out the popcorn kettle and make popcorn for the good folks before they started making movements toward departure. Very often the popcorn would be served with apples, and in maple syrup season, homemade taffy. Let it never be said that they would leave our home hungry! Later we learned that popcorn could be served for supper instead, which made more sense to me. 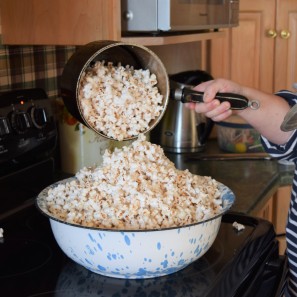 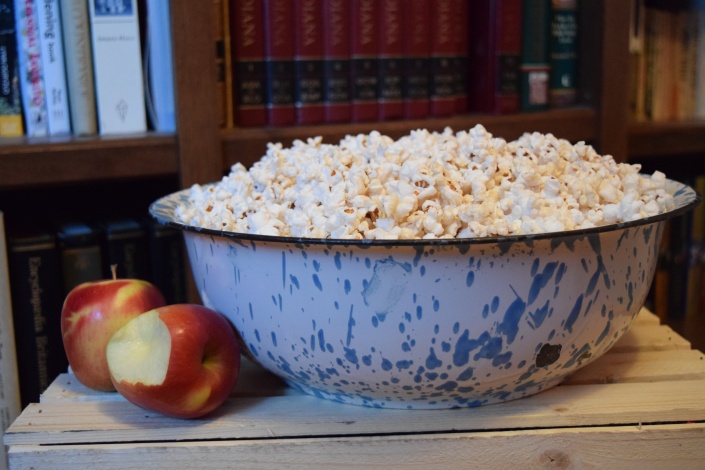 Making good popcorn is an art. It needs to be perfectly popped, with six kernels or less being the maximum left unpopped, at least that was the criteria in our home. There needs to be the perfect balance of saltiness, crispiness, and butteryness. I am absolutely of the persuasion that there needs to be a little butter on the popcorn. I see no point in masticating endlessly on a flat, saltless, butterless piece of rubber. Why eat popcorn at all? AND, I don’t insist on it being a point of membership or anything, but I use a sturdy popcorn kettle, used only for popcorn. I use my grandma’s well-seasoned kettle that I bought when she auctioned off her estate. It was the one thing I was going to get at any price. Let my cousin have the ugly stiff rubber doll that we used to play with; I was going to get that kettle!

Six years ago we went with my sister and her husband on a memorable trip to Portugal, Spain, Southern France, and Andorra. In the last week of our trip we were planning to stay at a very remote Portuguese village at the top of a mountain in a house owned by one of our employees. We knew it was rustic, and figured it was probably not well-stocked, so we stopped at the foot of the mountain and proceeded to shop for groceries. We were overjoyed when we found popcorn kernels on the shelves of the store. After all, we had not had popcorn for over two weeks! We bought some olive oil and butter, figuring there would be some kind of kettle there. 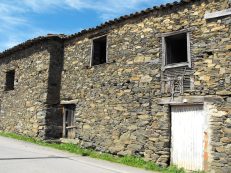 You never knew what was around the corner

Upon arrival, after exploring a bit, we noticed that there was no salt there. This would not do. Popcorn with no salt??? It was too far to go back down for just salt. A few of us were nearly in tears, our expectations dashed. Popcorn withdrawal will do that to you. After all, my sister and I had both been raised in the same popcorny environment.

A dear little lady in need of a hip replacement seemed to have been put in charge of us and kept hobbling over between our house and hers, wanting to help us. The trouble was, she only spoke Portuguese and we spoke about two words in Portuguese, with neither of them being “salt”. We communicated with sign language and us trying to pronounce “salt” in different cadences for a while, when my eyes spied an empty spice jar on the counter. Aha! I grabbed it, and shook it as though I was salting something. Bingo! Her eyes lit up and we could tell that she had got it. She hastened uphill to her home with surprising alacrity considering her lopsided gait, and returned with TWO containers of salt. One was a shaker of table salt; the other one a jar of very moist, fishy-smelling sea salt. We took the little shaker of salt, profusely saying “Obrigado” over and over. We had learned the Portuguese “Thank You” by then.

The Old Woman of the Hills

The Old Woman of the Hills 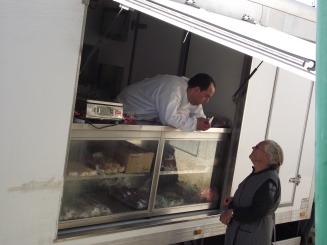 We made our popcorn in olive oil and butter, seasoned with salt we were very thankful for. Then we ate it with gusto on our front porch, waving at the neighbours trotting by, checking out the new kids in town. We surmised that they didn’t get a lot of visitors up there. 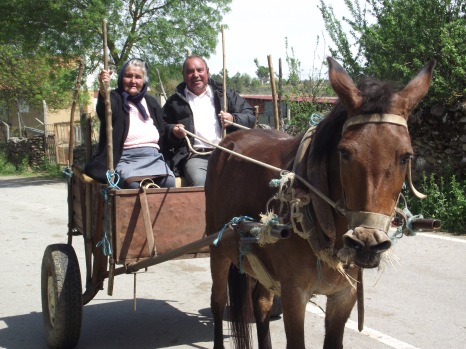 I spy with my little eye

The Woman at the Well

That was our initiation into a world of new experiences in the next few days; many hilarious, some touching, but all enthralling. You may hear more of them as life goes on. 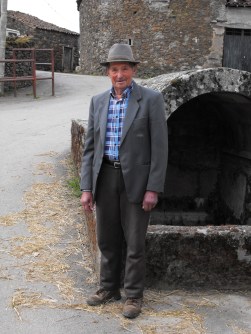 Sheep Coming Back from the Fields

Cattle going out to the fields 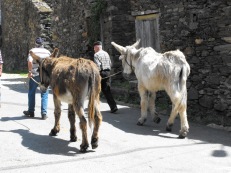 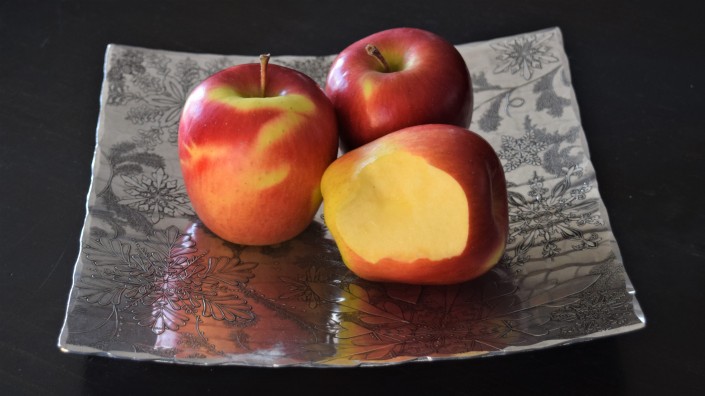 There are a few apples that are especially good for eating with popcorn. Some of my personal older favourites would include the Cortland and Snow apples in season, and the Empire. One of the newer ones would be the Ambrosia, a sweet apple that is similar to the Gala, but is firmer and even sweeter. It gets picked in mid-October, about a month after the Gala, so as a result it stores much better and retains its firmness longer.

This post is sponsored by Martin’s Family Fruit Farm. Memories and stories are my own. 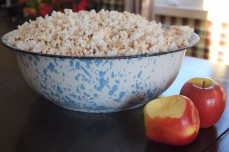 Get out a very large bowl. Heat the oil in a heavy pot or popcorn maker on high heat until shimmering hot. I often toss in a few kernels first; if they start “swimming” and sizzling, the oil is ready. Add the rest of the kernels and the butter and swirl the pot well, holding it above the burner. Do this a few times until it begins to pop, returning it to the burner in between. Keep the lid slightly ajar to keep popcorn crisp. Once it starts popping, remove pot and shake the kettle mid-air several times to shake the unpopped kernels to the bottom before returning it to the stove. When the lid begins to rise, shake about a third of the popcorn into the bowl. Return the kettle to the burner, shaking it again; repeat these steps until the popping slows down significantly. Shake salt over the popcorn, taste, and adjust. Serve with apples for an old-fashioned economical snack.

This entry was posted in Gluten Free, Heritage Recipes, Snacks.